Will A New Champion Arise?

The dream final is finally happening at the Sudirman Cup 2021. Top seed China will face Japan, the second seed, at the final round that will be held at Vantaa, Finland on Sunday (3 October 2021).

Yesterday, China defeated Korea in 3 straight matches in the semifinal round. Meanwhile, Japan defeated Malaysia after 4 matches with a 3-1 win.

China’s straight sweep over Korea proves their superiority once again. Previously, at the group stage and quarterfinals, China had to work really hard to defeat their opponents. At the group stage, they have to play all 5 matches before eventually putting an end to Thailand’s journey with 3-2. A similar thing happened at the quarterfinals. To secure their ticket to the semifinal, China had to play through all matches against Denmark where they finally won 3-2.

It seemed like China’s fire had turned hotter in the semifinal as they defeated Korea in 3 games. The first score was won by mixed doubles Wang Yi Lyu/Huang Dong Ping. The Tokyo 2020 Olympics Gold medalist won in 2 straight sets 21-14, 21-15 against Korea’s Seo Seungjae/Shin Seungchan in a match that lasted 44 minutes.

Shi Yu Qi then added another point at the men’s singles. After being defeated at the quarter-final by Denmark’s Viktor Axelsen, he came back stronger. Shi Yu Qi who is currently #10 at the world ranking, beat Heo Kwanghee who is #34 at the world ranking, in a rubber set 17-21, 21-9, 20-11 that lasted 57 minutes. This was the first time they both met.

The straight 3-0 result opens the door for China to win the Sudirman Cup for the 12th time. However, it won’t be so easy because they will have to face Japan who have strong players in all categories.

At the men’s singles, there’s Kento Momota, the world’s current #1. Even though he’s the only player who lost against Malaysia at the semi-final, Momota has a better record than China’s Shi Yu Qi. In their previous 6 meetings, Momota had won 4 times. There’s a huge chance for Momota to win the match against Shi Yu Qi.

However, looking at Japan’s squad that went against Malaysia, it looks China has a better chance in the women’s doubles. Japan’s Mayu Matsumoto/Misaki Matsumoto will face a serious challenge against world #2 Chen Qing Chen/Jia Yi Fan who won a silver medal at the Tokyo 2020 Olympics.

Another category that will be interesting to watch is the mixed doubles. China has Olympic gold medalist Wang Li Lyu/Huang Dong Ping while Japan has 2021 All England champion Yuta Watanabe/Arisa Higashino. Looking at their previous meeting records, Wang Yi Lyu/Huang Dong Ping had won 10 times in 11 meetings.

At the 2021 Sudirman Cup, both China and Japan deserve to be the first and second seed. It will be very interesting if Japan comes out as the champion because that means the Sudirman Cup will have a new winner, after previously China winning it 11 times, Korea for 4 times and Indonesia once. 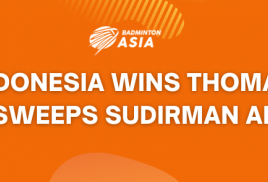