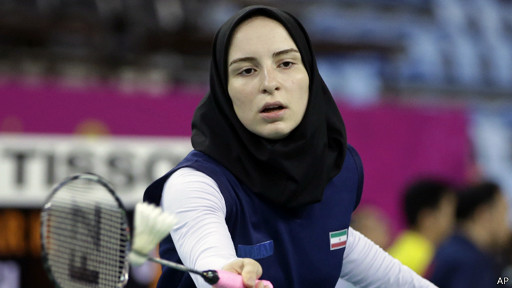 A badminton racquet as a birthday present from her parents at the tender age of seven years started Soraya Aghaei Hajiagha's love affair with the shuttle sport that has made her Iran's number one woman shuttler.

The 20-year-old Soraya, however, is still learning the finer points of badminton but has set herself lofty targets with the 2020 Tokyo Olympics topping her list. It is tough call for Soraya but she is determined to walk an extra mile to achieve success.

After getting the racquet, Soraya says was inspired to play the game she got herself registered with a badminton club. It was a matter of time before Soraya made the grade into the national team - and this came in 2008.

Soraya, who is doing Sports Science at Iran University, is among the 12 players from Iran, Jordan, Sri Lanka, Syria and Kazakhstan in the Asia Olympics Project training camp.

"I am very grateful to be part of this development project as it inspires me to reach my targets," said Soraya, adding that she also hopes to do her badminton training in Malaysia as it "motivates" her due to the many top players in Malaysia.

"Malaysia have many top players who have grown in their game...this inspiring to my badminton career.

"This project has really helped me to improve my badminton. I hope to play in next year's World Championships (Glasgow) and also in 2018 and 2019."

In the same breath Soraya was quick to point out that qualifying for the Tokyo Olympics (2020) tops her priorities apart from carrying her country's challenge in the 2018 Asian Games.