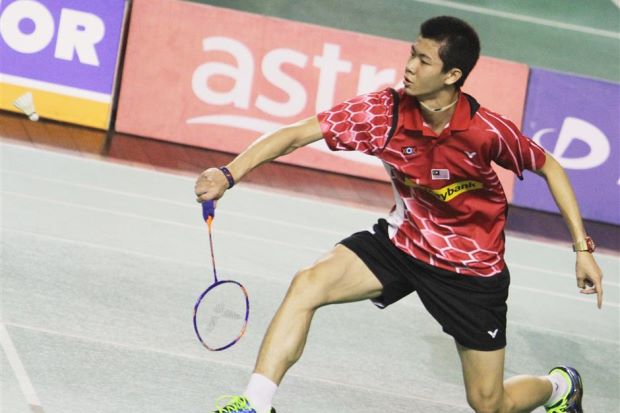 There was special focus on Malaysia's Lee Zii Jia ( Image above) when the semi-finals were decided in the men's singles in the BWF World Junior Championships in Bilboa, Spain on Friday.

The No 2 seed snuffed out Europe's last hope, seventh seeded Toma Junior Popov of France in 33 minutes in his 21-12, 21-18 win in the quarter-finals to make it an all-Asian affair in the world meet.

The Malaysian will face Indonesia's No 14 seed Chico Aura Dwi Wardoyo for a place in Sunday's final. Chico defeated Singaporean Ryan Ng Zin Ren (No 8 seed) 21-18, 21-14.
Meanwhile, top seed Kantaphon Wangcharoen of Thailand was too strong for his South Korean opponent Woo Seung Hoon in the quarter-final, winning 21-11, 21-9 in 32 minutes.
Kantaphon will battle China's fifth seed Sun Feixiang in the semi-finals. The Chinese sent Japan;s Koko Watanabe, the ninth seed, out with a 21-17, 21-11 scoreline.
A Chinese, a Thai, a Korean and a Japanese will battle for a place in the women's singles final.
In the quarter-finals China's No 2 seed Chen Yufei defeated compatriot Han Yue 21-16, 21-15 while No 3 seed Pornpawee Chochuwong of Thailand gave a dominating performance to crush Singapore's Yeo Jia Min (No 6) 21-11, 21-11 while Japan's unseeded Natsukie Oie continued her giant killing feat to make the last four.

Natsuki who defeated last year's champion and No 1 seed Goh Jin Wei of Malaysia in round five, took the scalp of No 9 seed Gao Fangjie of China after battling for 50 minutes in her 22-20, 21-18 win. Her next match is against Pornpawee.

However, China still have their No 1 pair Han Chengkai-Zhou Haodong to vie for the gold medal. The pair strolled past Malaysians Leong Jun Hao-Ooi Zi Heng 21-8, 21-19 in only 22 minutes.

There was joy for Malaysia in the mixed doubles - earning a place in the last four through the mixed combination of Chen Tang Jie-Toh Ee Wei who fought a gruellng battle against India's Satwiksairaj Rankireddy-Kuhoo Garg before prevailing 13-21, 21-12, 21-19.

The Malaysians next hurdle is a one tough one - against No 1 seeds He Jiting-Du Yue who crushed Indonesia's Amri Syahnawi-Vania Arianti Sukoco 21-11, 21-11.

Indonesia's Rinov Rivaldy-Apriani Rahayu, the No 2 seeds and bronze medal winners in Lima, Peru last year, failed to make the last four after they were shocked by unseeded Koreans Park Kyung-hoon-Kim Hye-jeong 21-18, 15-21, 21-14 in a 58 minute thriller.