A New Kind of Badminton: AirBadminton

There’s a new kind of badminton in town, and it’s one that we should all be excited about.

A new badminton that’s played on all kinds of surfaces - hard, grass, sand, in gardens, beaches, streets, parks in all parts of the world. A new, and ambitious badminton that’s made for everybody. A new kind of badminton called AirBadminton.

Now you might be wondering, what is Air Badminton? What’s so new about it? How is it any different to the badminton that we all know and love?

AirBadminton is played outdoors and was created to give everyone of all ages and abilities to play badminton. It’s fun and inclusive and we wanted badminton to be accessible for everybody. Badminton is one of the most popular sports in the world with over millions of players, but there’s always room for more people to play and fall in love with the sport.

BWF first introduced AirBadminton in March of 2020, however it was already in the works as early as 2013. In 2014 Nanyang Technological University (NTU) partnered to help develop prototype shuttlecocks for testing. Over the years there were various prototypes created before the first initial testing phase in early 2018, with the participation of ‘Olympians, national team players, students, club players and teenagers’. The next year saw more testing phases before it was first revealed in May 2019 and launched in Guangzhou with BWF’s Global Development Partner, HSBC. It was then finally, in March of 2020, where it was introduced to the world.

AirShuttle: A New Kind of Shuttlecock

One of the most exciting things about AirBadminton is the new shuttlecock - AirShuttle. There are 3 main features of the AirShuttle: good flight trajectory, durable material and wind resistant. The shuttlecock was created because we wanted players to have a better experience when playing outdoors. This new shuttlecock is compatible with existing rackets, supporting our mission to make it as accessible as possible for everyone to play. 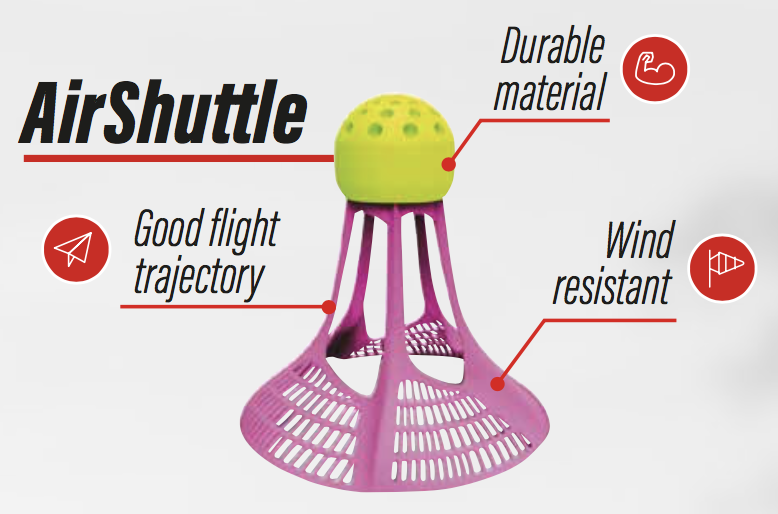 The Image above is an example of the AirShuttle

When it comes to playing AirBadminton, the rules are similar. The main difference is in the design of the court. The court is a rectangle measuring 16m x 5m for singles and 16m x 6m for doubles and triples. The court is a little longer than the usual badminton court because it will have a 2m dead zone at the front. The dead zone was implemented because after multiple testing, it showed that it was difficult to control net shots with the AirShuttle, therefore the net area was removed which encourages more rallies and strokes away from the net. Players cannot step inside the zone to hit the AirShuttle, but once hit, they can step inside.

The Image above is an example of an AirBadminton Court

In AirBadminton, you can play Singles, Doubles and Triples.

The aim of the game is to score points by:

When serving, there is a 3m marker visible on the sidelines. Players will serve from anywhere behind the marker, with both feet stationary on the ground. The player that serves can direct the AirShuttle anywhere on the opposing player’s court that’s beyond the 2m line.

For scoring, The BWF recommends the best of five games up to 11 points. If the score is 10-all, then the side that has a two-point lead first wins the game. If it then becomes 12-all, the side that gets the 13th point will win. The winners will serve in the next round. However, the scoring systems used can differentiate based on local considerations.

No Roof? No Problem!

There are so many surfaces that you can play Airbadminton on, for as long as they are levelled and safe. AirBadminton is designed to be played on grass, hard and sand surfaces like streets, gardens, beaches, parks and playgrounds. AirBadminton is a sport that can be played anywhere by anyone.

AirBadminton was created so that everyone from different cultures and different parts of the world can experience the joy and the thrill of playing badminton. It encourages people to have fun with their friends, families and communities outdoors, fostering a better and healthier environment for everyone. It can help foster qualities such as speed, strength and endurance especially for children. Being active can reduce the risk of health problems such as high blood pressure and obesity. It’s all about maintaining a balanced and healthy lifestyle, while also having fun because Airbadminton is an exciting game to play for everyone. 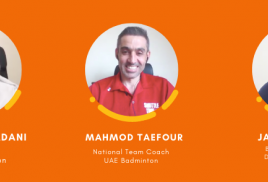